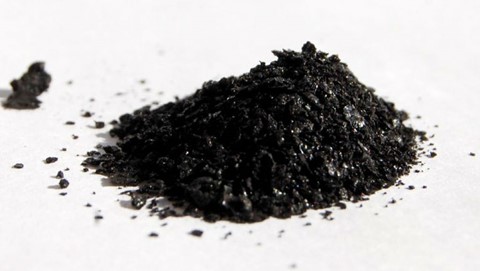 Sources and use. Humic acid is formed from composted organic plant matter. In the Western U.S. it is found in seams about 10-12 ft underground, in about the same thickness. A typical seam could be half the size of a football field. It is much less shiny in appearance than true coal. It is also much younger than coal, about 50,000 years old (coal is millions of years old). It is often referred to as lignite, brown coal, or leonardite; in Ayruvedic medicine it is known as shilajit. Since the original plant minerals (all in about the right amounts for living systems) stay in place during the composting process, humic acid has long been recognized as a very good mineral supplement. Humic acid is mined in ton-quantities worldwide every day. Five railcar-loads of material (500 tons) are produced every week at the source used by Laub BioChem, for example. Use as a drilling mud additive consumes at least 95% of the world’s production of humic acid. The next-highest volume use is as a fertilizer; followed by adjustment of the properties of coal-water slurries and the manufacture of charcoal
briquets.

Physicochemical properties. The chemical structure of humic acid is somewhat like a flat wagon wheel, with spokes emanating from a hub to a rim. It is a largely planar (“discotic”) molecule as a result of substantial aromatic content. It is comprised of many diverse functional groups–including aliphatic and phenolic hydroxyl, carboxyl, ether, ester, amine, amide, sulfhydrol, and thiol ester and ether assemblages. These groups are chemically “sticky”, that is, readily form strong hydrogen bonds with equally-sticky glycoproteins such as those found on virus surfaces. (Humic acid will also bond weakly to cell surfaces, but with no apparent adverse effects.) The molecule is also highly flexible because of its size–about 50,000 Da molecular weight. (Fulvic acid–the 1,500- Da small-molecule analog of humic acid–is not flexible and as a result exhibits no antiviral efficacy.) The approximate empirical formula of humic acid is similar to the sodium salt of trimethoxybenzoic acid (C10H11O5Na). Reverse-phase “high performance” liquid chromatography is a facile way of “fingerprinting” humic acids.

Safety. Humic acid has been subjected to extensive safety assessment. In vitro testing by many independent laboratories has demonstrated little or no toxicity. In liveanimal in vivo trials carried out by Laub BioChem, mice were injected intravenously with various concentrations each of three synthetic humic acids and one natural-product humic acid. No toxicity at any concentration of any humic acid in any of the mice was found. The upper safety limit of humic acid has yet to be determined; however, the results from live-animal trials suggest that it is at least 1,000 mg/kg body weight. For an average adult weighing about 80 kg (175 lb) the upper safety limit of humic acid is therefore at least 80,000 mg/day. (The normal prophylactic dose of humic acid is 500 mg/day.) In addition, humic acid does not exhibit any interactions with any other drug or nutraceutical material, nor does it cause or provoke any side effects.

Efficacy. All animal viruses require a host cell for reproduction: the virus first attaches to a host cell. The virus capsid is then injected into the host cell; and the capsid’s interior is exposed, releasing its contents. New viral RNA or DNA is produced in the cell’s nucleus, then transported back into the main body of the host. The component parts of a new virus particle are assembled and the new virus perforates the host cell wall, emerging into the surrounding medium only to repeat the process. The only function of a virus is to reproduce. VFI (“Viral Fusion Inhibiting”) humic acid coats viral binding sites, which prevents viruses from fusing to host-cell surfaces. This in turn blocks viral reproduction. That is, the chemically ”sticky” glycoproteins that viruses use to attach to host cells are deactivated by VFI humic acid, somewhat like the two counterparts of Velcro coming together. Thus, VFI humic acid doesn’t kill viruses; it only deactivates their points of attachment to host cells. Since viruses treated with VFI humic acid can’t attach to host cells, they can’t reproduce. Fortunately, viruses don’t live forever. For example, in the absence of host cells influenza viruses survive only 36- 48 hours even if in an appropriate medium. They then die of their own accord. Limiting or eliminating viral reproduction also gives the host immune system a much better chance to suppress viral infection. That is, the host immune system’s work is made much easier when the number of virus particles is not allowed to increase. Thus, influenza infections last only a day and a half when treated with VFI humic acid. Clinical data have established additional efficacy against such diverse viral types as hepatitis C, herpes, hemorrhagic fever, and HIV. VFI humic acid is therefore often referred to as the world’s first all-natural broad-spectrum antiviral.